Call for demonstration against deportation of Sudanese Nuba 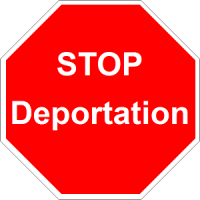 In protest of the planned deportation of an rejected Sudanese refugee we organize a demonstration to call for stopping this irresponsible and violent act. The man is part of the We Are Here group and his brothers and sisters of We Are Here are very worried what will happen to him upon arrival in Khartoum. We fear he will be detained and tortured.

The Repatriation and Departure Service (DT&V) is planning to send this young man to Khartoum coming Tuesday May 16, at 12:50 with flight number KL0565. Airline company KLM is facilitating this, what we call, crime. High courts have decided not to stop this deportation, we are now calling for pressure from society and politicians, to make this stop.

Our brother is from the Nuba Mountains. This region is being bombed since 5 years and Nuba people face strong repression in Sudan. As a non-Arabic Sudanese the man will face extra danger. This is why we don’t publish his name. It is known that customs services and airport police in Sudan see refugees who asked for asylum in another country as collaborators. People who arrive with an emergency travel document and haven’t been in Sudan for a long time are seen to be suspicious. It is known that such persons are being detained, tortured and murdered.

Human rights organizations such as Amnesty International, PAX and Human Rights Watch all declare in country reports that the human rights situation in Sudan is bad and that especially Nuba people are at risk when being deported.

We will be active the coming days in the streets and online to protest against this deportation. Please come and join us and show solidarity.

Online you can use hashtag: #StopDeportationFlightKL0565

Forced deportations are dangerous and we see them as criminal acts against humanity.