What did we achieve in four years 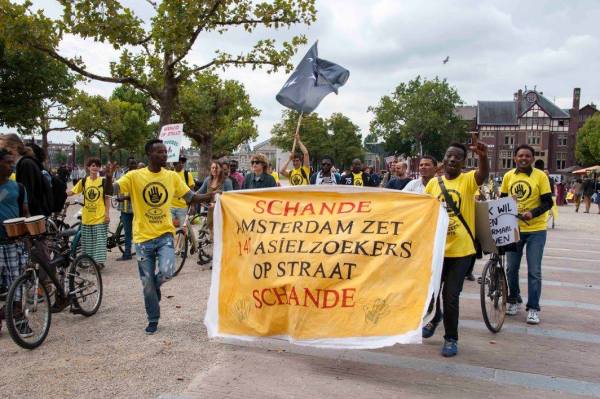 a supporter who joined the refugees collective since 2012, reflects upon 4 years of we are here:

To put our fight into perspective

I fully understand that if you live under circumstances where your whole existence is denied and all your human rights are taken away – every day is too long to wait more. Let me be very clear that of course I myself would like to see a total change rather today than tomorrow. But I also like to put the results of four years We Are Here into perspective.
For that I want to make a small comparison with the anti apartheid movement (AAM). Just to make sure I am not misunderstood: I don’t intend to say that apartheid (in South-Africa or in general) is past. I know there is still a lot of apartheid around the world. But I take this campaign as an example, as it is often referred to as a very successful movement with a lot of impact. I like to see We Are Here as a successful movement too. And both are about fighting injustice.

When you go through the history of AAM it becomes clear that there is a period of starting up, a period of early, small successes, some disappointments and a big struggle to keep the topic on the agenda, with in the end quite big successes and adaptation of the message in broader society.

Note that although this movement is referred to as a very successful one, it took many years to come to real successes and change of laws. I don’t say this to discourage people, but rather to encourage: change might not be as quick as you want it to be, but don’t forget small changes and periods of disappointment are normal in a course to a bigger success..

Here some highlights on a timescale (source is Wikipedia):

• The Boycott Movement was founded in London on 26 June 1959 at a meeting of South African exiles and their supporters.
• The Sharpeville massacre on 21 March 1960, when 69 unarmed protesters were shot dead by the South African police, triggered an intensification of action.
• The AAM scored its first early success when South Africa was forced to leave the Commonwealth in 1961
• In 1962 the AAM started campaigning for a suspension of South Africa from the Olympic games. 8 years later, in 1970, South Africa was finally expelled from the Olympics.
• In November 1962, the United Nations General Assembly passed a non-binding resolution for establishing a Comitee Against Apartheid. All Western nations refused to join the committee as members.
• The AAM tried to make sanctions an election issue in the 1964 General Election in the UK. But by the end of 1964, it was clear that the election of the Labour Party had made little difference in the governments overall unwillingness to impose sanctions.
• The AAM initiated an academic boycott of South Africa in 1965
• 1966, 7 year after its start, the AAM started a cooperation with the United Nations. This new partnership formed the basis for all future action against apartheid.
• In 1990, 31 years after the start of the AAM, Nelson Mandela was released after 27 years imprisonment.
• Mandela and de Klerk negotiated an ‘end’ to apartheid and organised the 1994 multiracial general election in which Mandela led the ANC to victory and became President, 35 years after the start of the anti apartheid movement.

The progress of WAH compared to AAM

I think the startup time for We Are Here was very short. Many refugees say that the roots lay in the tent camp protests in Ter Apel. I remember very well that at the anarchist festival Pinksterlanddagen in 2012 an extra session was added to the program: refugees came to tell about their protest. I think it was new to all of us: refugees speaking out and taking action by themselves. It was really a break through.

But also a lot happened since that speech. I remember I was thrilled by the fact that refugees came to speak but rather disappointed about the content. They mainly thanked the audience for wanting to listen to them. If I compare that with some of the great, strong speakers we had over the years, there has been a huge development.

Basically you could say the movement is still in its early years. With successes and disappointments. The decision of the European Court that shelter does not have to be conditional is one of these disappointments. But don’t forget disappointments are part of the process and if you want to make a big change, you have to accept dealing with some disappointments…

So what did we achieve

I have collected some major topics and try to give an overview of what we achieved on each topic.

Although this cannot be listed as a direct success, I think it is essential. If you want to change a system in the long run, the first thing you need is awareness. I think most of even the supporters, didn’t know about the asylum gap before We Are Here. Of course still a lot of people have to be informed, but We Are Here and the problem of the asylum gap has been in every major newspaper, TV channel, radio station and magazine of the Netherlands and even several abroad, in addition to many local media. Neighbours of the different locations became informed and involved. Refugees spoke out at dozens of schools, universities and other places. Speeches were heard on demonstrations. Change starts with awareness about what is wrong…

Undocumented refugees have been invited on formal tables to talk to national politicians. Refugees showed their presence in and in front of the Parliament, when topics that concerned them were discussed. Locally, in Amsterdam, many politicians have visited locations of We Are Here and are cooperating in the aims of the group.

Legally a big struggle took place, till the level of the highest national courts and even the European courts. International human rights organisations have spoken out specifically about We Are Here and / or the situation of undocumented refugees in The Netherlands. Although this did not lead to a drastic change in the procedure yet, it is a major achievement.

This sounds obvious, but I think it is not. Before We Are Here started, most refugees without papers were hiding, trying not to be noticed. We Are Here brought a very important change: refugees started to speak out about their situation. The right to speak is in the end an essential one.

Also not a right that was in practice for undocumented people. WAH clearly created this right.

I know it is far from ideal, but compared to what there was before We Are Here, really a lot changed. I heard stories from people literally living on the streets, sleeping in a park, hiding in buildings, day by day looking for a place to sleep and be safe. A direct result of We Are Here (and through the Diakonie and with the help of Pim Fischer) is that there is BBB available now for undocumented people. This did not exist before. In addition there have been camps / squats for the last four years which have been ‘tolerated’ in a certain extend. They at least brought shelter.

We are far from there yet, but as a direct result of We Are Here, We Are Here Academy is offering educational programs to undocumented refugees. In addition there are also more and more other initiatives. I think WAH Academy served as a breakthrough in this, from the moment that educational institutions started to offer facilities and teachers/professors started to speak out for the right for education. Next to the Academy there have been several different courses and personal coaching and learning by experience on the field of organizing, speaking etc.

This specific right has not received much attention so far in We Are Here. During a brainstorm session about the future of We Are Here, many refugees referred to this topic as one that they wanted to put focus on. Maybe something for the next year. At the same time, it is not true that nothing happened. Experience was built up within the ‘grey area’: It is possible to do arts projects and to sell the art. There have been bike repair shops. T-shirts are sold. Usually the money goes to the collective, which makes it easier. But also with respect to personal benefits: although without result till so far, some people are in a legal/formal process for the right to sell. And I don’t know much about these parts but structures like the boat/captain project and the Vluchtmaat also result in generating money for the refugees in a certain way. Last but not least several refugees found voluntary work to do. Whereas earning money is an important part of the right to work, being able to spend your time in a useful way is equally important.

Don’t forget for example performances of the We Are Here band in Paradiso. Even playing with world famous artists took place. There have been theater plays and dance shows. Cooking workshops. Refugees joined the ‘Wijksafari’of Adelheid Roosen. In the Salon des Refuses refugees made wonderful art and / or furniture. And do we remember the big letters ‘We Are Here’?

Right to freedom (no detention)

We Are Here members are still being arrested once in a while, but what a big difference with a couple of years ago, when there were constantly people in detention; sometimes for months. The regulations for detention have changed: people can only be put in detention when there is no reasonable other option and when there is ‘zicht op uitzetting’. This is not a direct success of We Are Here; Amnesty International played an important role in this, as well as the many protests and vigils in front of detention centers. But We Are Here also took part in several of those and / or organized them and also brought out the stories of the ridiculous circle of being put in detention and then back on the street again. I remember Younis was a main face of the Amnesty campaign for a while. And what a difference it makes whether people have to be constantly scared for being arrested, or can move around more freely.

There was already a certain basic right, but most people had no idea – either that these rights existed or how to make use of them. Thanks to supporters, doctor Co and other volunteering doctors, Dokters van de Wereld, Equator, and others it is now at least clear that there is some basic medical care. Buddies and supporters often provide (assistance for) additional support.

Maybe one of the most important achievements; at least not one that should be neglected. Instead of being on the street alone, people now belong to a group. And as a group you can make demands. And in a group you can share grieve, frustration and happy moments. And the group has built networks. Networks of supporters, of lawyers, of lobbyists, of medical care organisations, of buddies, of refugees that got their status, of activists, squatters, cooks, shops that donate food, people who donate money, funds, etc etc.

Did we achieve this? No. But… for many people yes. Around 70 members of We Are Here received their status in the past four years. In most cases this would not have been possible without the structures that We Are Here created: networks to good lawyers, a buddy project, support in how to deal with a hasa, financial help to be able to meet your lawyer or organisations where you can collect proof for your case. This has now proven that a lot of initial IND decisions have been wrong. This fact will for sure be used the coming time by lawyers / supporters for lobby and media attention. 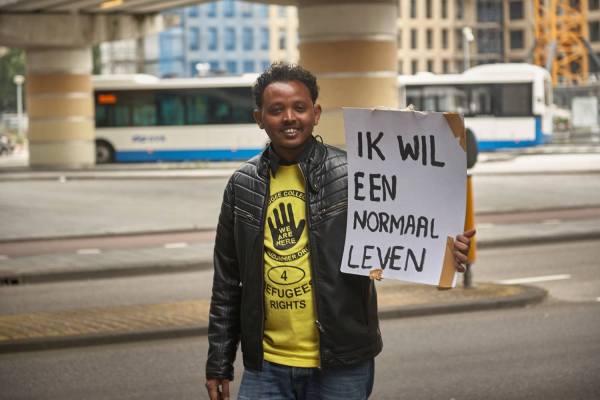