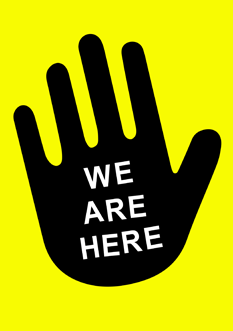 We have invited you here today to tell you our story. The past few weeks there has been a lot of negative media attention about our presence in this neighborhood. So we want to explain to you the circumstances that led us up to this point and why we are here.

Rita Verdonk and Fred Teeven decided that there should be an example made of certain refugees. This was done to discourage other refugees of coming. We are the product of this policy. But people are not products. Nor are we experimental ground to test your political theories on. We are human beings who deserve a life. Just like everybody else in this country and in the world.

Sometimes we cannot get ‘status’ because the IND attempt not to believe our reasons for fleeing our countries. And sometimes the IND does not take enough time to study one’s procedures. But then also they cannot send us back. And we cannot ask for asylum in another country because of the Dublin convention which was corrupted by the European immigration system. Adding to this, anybody who has been here for 17 years or less has missed out on the general pardon of 2006. This general pardon was a failure because of its selective nature. So we are stuck here.

The Mayor and the city council of Amsterdam decided that refugees in the asylum gap do not get 24-hour shelter. They also do not want more refugees to come. So we had to find solution for ourselves.

In the past 5 years we have done all the work ourselves without any help from the government. We are activists who fight for our story to be heard. We are theater-makers who show our story on the stage. We are photographers who tell our story with pictures. We are DJs, chef-cooks, carpenters, teachers. We are story-tellers. And now we tell you our story. We have all these talents and we left our homes to look for safety. We can use our qualities to help make this country better.

Now we attempt to explain the inhuman conditions that the Dutch government forced on us for the past 17 years, and we want to change the public opinion on the whole situation in general. But also address the negative media attention which feeds this public opinion and therefore our inhuman treatment.

It was okay for you to accept that we live in extremely cold and inhospitable conditions in the abandoned church or on the streets. But you do not accept when we find a better place to live. We did not come to the Netherlands or to this neighborhood to cause problems for people. We came here to find a safe life for ourselves.

We came to work together with the neighborhood and create a nice place for us to live but also for the people who are already here. I believe that with last Saturday’s open day we achieved this cooperation. We had a beautiful day that caused many new friendships. But still the media was negative.

We would like to express our disappointment about the fear that has been created around us through the media. The impact of this negative coverage has led to right-wing people coming to our street, burning our banners and threatening the safety of our entire neighborhood. We believe the media to have been a central culprit in this and we want to call them out on it.

We hope that this press conference has clarified our situation in this neighborhood, in this country and in this world. We have faith that the media will not continue their fearmongering any longer and we hope that together we can think of a solution to our problem. Because soon another 150 people from other We Are Here groups in the city will also be evicted and put on the street. Just like the eviction of the women’s group past Tuesday. This
situation cannot go on any longer.

We call for the Dutch government to change their immigration policy.
We call for the city of Amsterdam to take responsibility for its inhabitants.
And we call for an end of imperialistic and capitalist warfare.
Because exporting ammunition means importing immigration.
Thank you very much.

Khalid Jone, for We Are Here at Rudolf Dieselstraat.